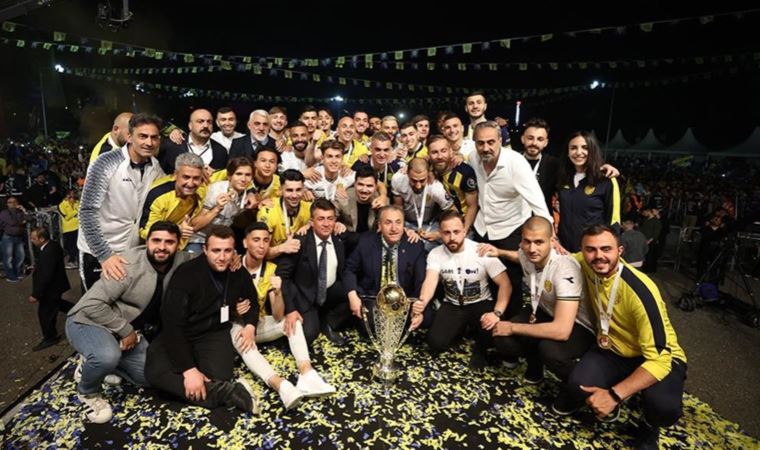 Thousands of yellow-dark blue fans took part in the championship celebration held on the grounds of the 19 May Stadium with the participation of Vice President Fuat Oktay.

The players and technical committee, who came to the established platform one by one, experienced great enthusiasm with the fans.

Addressing the fans at the ceremony, MKE Ankaragücü Club President Faruk Koca thanked Vice President Oktay, who gave the good news that the 19 Mayıs Stadium will be built.

MKE Ankaragücü came to Ulus, where the championship was celebrated, by taking a city tour with an open-top bus.

Defeating Ankara Keçiörengücü 2-1 at Aktepe Stadium in the last week of the league, the yellow-dark blue team met with the great interest of the people of Ankara during the city tour.

Thousands of fans, who came to the celebration ceremony on the grounds of the 19 May Stadium, experienced the enthusiasm of the day with the concerts.

In the celebration, many names, especially the singer Demet Akalın, gave concerts.

By admin
Recent Posts
Latest News
Facebook Twitter WhatsApp Telegram
Back to top button
Close
Featured Posts
Services of the Saudi Passports Authority and ways to communicate with it
February 14, 2022

The Justice Watch launched for Gezi detainees has passed 5 months

Macron launches a campaign to run for a new term on March 5
February 23, 2022

elite, already without stars and without sex, bet this time for the vindication
1 week ago

elite, already without stars and without sex, bet this time for the vindication

Arguiñano (21.2%) achieves a ‘rich rich’ record by signing the best fee in its history on Antena 3

‘There is no one living here’, a benchmark for More Madrid for its new campaign against housing policies
October 18, 2022

‘There is no one living here’, a benchmark for More Madrid for its new campaign against housing policies