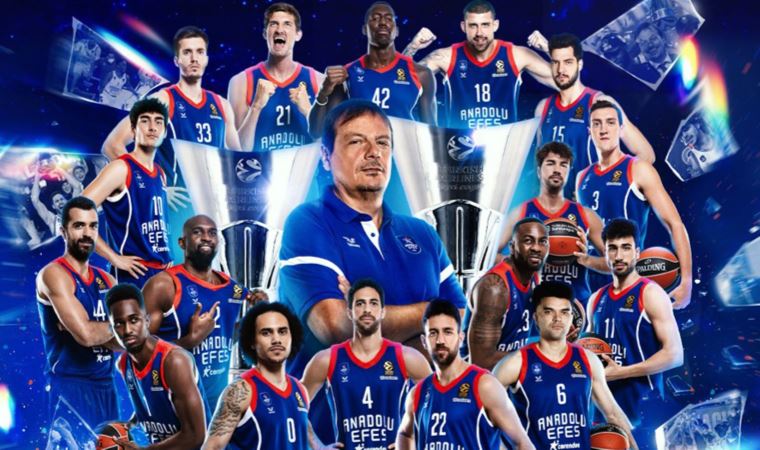 Anadolu Efes, the defending champion of the Turkish Airlines EuroLeague, the giant cup of Europe, once again took the field to defend its title.

Ergin Ataman’s students, who beat Olympiacos with Vasilije Micic’s three-pointer in the last second, faced Real Madrid, who managed to overcome the Barcelona obstacle in the Final Four Semi-Finals.

Anadolu Efes, who came out on the court with the title of the last champion, became the European champion for the second time in a row by beating Spanish Real Madrid with a score of 58-57 in the breathtaking match.

ANATOLIAN EFES, THE LARGEST OF EUROPE, AGAIN! ??#NewQuest#MyPlaceHere#This Is The Place Of The Cup#BackToBack pic.twitter.com/dBY9NXCf5Z

In the match played at Stark Arena, Anadolu Efes scored with Micic and Larkin, and Real Madrid, who used the bottom of the basket quite well with Tavares, finished the first quarter ahead 15-14.

In the second quarter, which started with mutual baskets, Real Madrid, which was effective with the numbers gained by the players who were included in the game from the side, went 34-29 in the dressing room.

At the beginning of the second half, both teams struggled to score. Real Madrid increased the lead to 9 points in the 25th minute in front of Anadolu Efes, which played with a low percentage on offense: 40-31. The navy-whites, who recovered and caught a 7-0 series, narrowed the gap to 2 in the 28th minute: 40-38.

With 33 seconds left in the quarter, there was an argument between Poirier and Anderson. Rudy Fernandez remained on the ground in a duel with Anderson. Poirier then pushed Anderson, whom he was walking on. Other intervening players prevented the tension from escalating. The referees, watching the position from the side screen, penalized Anderson and Poirier with an unsportsmanlike foul. Real Madrid entered the last quarter with a 42-40 lead.

Starting the fourth and final quarter well, Anadolu Efes took the lead in the 32nd minute with Micic’s accurate throw away: 42-43. The remaining part was the scene of great excitement. Responding to Real Madrid, which was effective with Causeur and Llull, with Singleton in defense and Micic and Pleiss in offense, Anadolu Efes won the match 58-57 and became the champion.

Sending the sketch of Güldür Güldür Show from Minister Nebati: I couldn’t see the glow

Request for ‘tax relief for employees’ from HAK-İŞ

Save me: Kiko Hernández reveals what Mercedes Milá told him in a disco: “I was very touched”

30 August message from the parties in the Socialist League of Forces: Again for a victory!

Milli Gazete declared the decision of the Istanbul Convention a ‘victory’: ‘Now it’s time for 6284’

Putin and two leaders without “flags”… Will the Crimean scenario come true?
February 21, 2022

Putin and two leaders without “flags”… Will the Crimean scenario come true?

Anna Sorokin, the con artist who inspired ‘Who is Anna?’ Netflix, she will be released from jail on $10,000 bail

He stabbed the bus driver: Released in the second hearing
June 20, 2022

He stabbed the bus driver: Released in the second hearing

A case study on the ground… the world is watching Russia’s missile arsenal
February 28, 2022