President Recep Tayyip Erdoğan said that the greatest legacy they will leave to the youth will be the vision of 2053, which will be implemented on the strong democracy and development infrastructure that has been built.

Erdogan spoke at the “Launch of Independence Folk Songs and the Meeting Program of Representative Youth and National Athletes” held at the Great Ankara Mosque Culture and Congress Center on the occasion of the 19 May Commemoration of Atatürk, Youth and Sports Day. 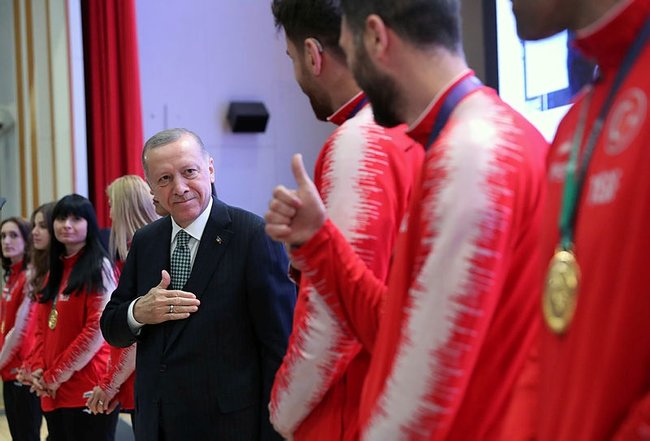 Starting his speech by greeting the young people who listened to him, Erdoğan congratulated the 19 May Commemoration of Atatürk, Youth and Sports Day.

Remembering with mercy all the martyrs, veterans and heroes who sacrificed their lives to make Anatolia a homeland from Manzikert to the National Struggle, Erdogan said, He commemorated all members of the Turkish army, from Gazi Mustafa Kemal Atatürk to his soldier, with gratitude, who brought the enemy to victory by pouring the enemy into the sea on September 9, 1922.

Stating that they see the youth, to whom this important history of the National Struggle was gifted as a gift, as the guarantee of independence and future today, Erdogan said, “The greatest legacy we will leave to you young people will be the vision of 2053, which we will put into practice on the strong democracy and development infrastructure we have built. ” said.

“As an elder who has devoted my life to the cause of civilization, rights and justice since my early youth, who has fought for this cause and passed many tests, I say never give up on your dreams.” Erdogan advised the youth, “Don’t mind the difficulties of the conditions, do not surrender to the scarcity of opportunities, do not be afraid of the courage of the obstacles that stand in your way on the path you walk. None of these should ever distract you from your goals that you have raised in your heart and shaped in your mind.”

“Because you, Osman Gazi, who laid the foundations of a world state that he gave his name at a young age, because you, Fatih, who conquered Istanbul at the age of 21, which many rulers could not besieged and conquered, because you, Yavuz, who increased the size of the lands of his state 2.5 times in his short life. Because you, Abdulhamid, who managed to keep his country alive for 33 years in the most complicated period of the world, because you, Gazi Mustafa Kemal, who founded a new state on the last remaining piece of homeland, because you are the first flags of the struggle for democracy and development and Martyr Menderes, the flag-bearer, because you are the heirs of the late Özal, who has the vision to move Turkey through an era, because you are the heirs of a great vision that has brought Turkey to the top of the world league with the works it has brought to the country in the last 20 years and the goals it has set before itself. We stood up with our youth, we walked with our youth, we succeeded with our youth. Eren, “Where I am not, there is no one” feeling, we were brought up with the morality of the youth who took care of their cause.” 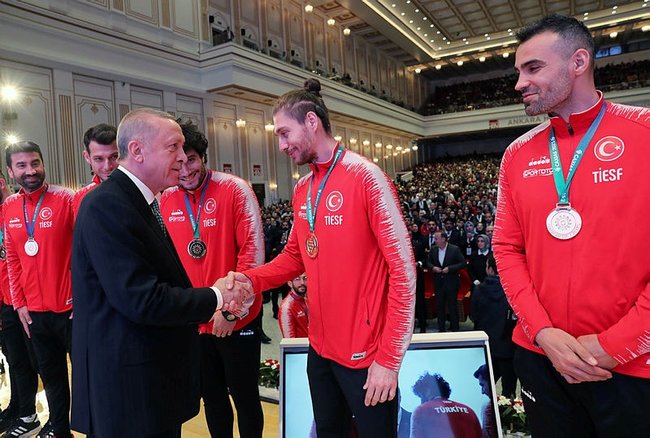 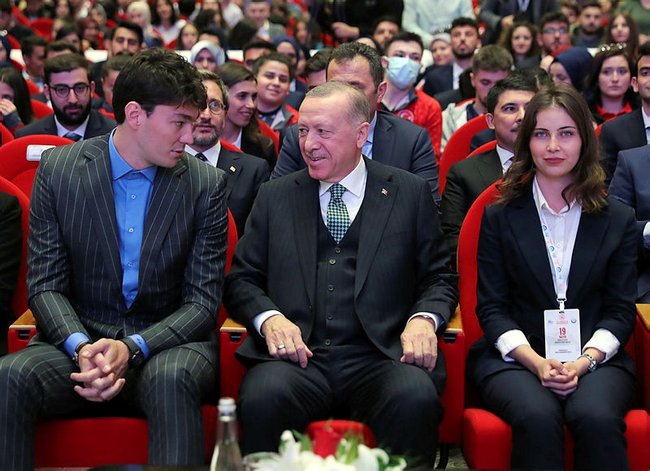 President Erdoğan emphasized that when the putschists took to the streets on July 15, they found young people in front of them, and that in this most glorious resistance in the history of the Republic, the courage and determination of the youth outweighed the power of weapons.

Noting that even this picture alone is enough to prove how justified their trust in young people is, Erdoğan continued his words as follows:

“Today, we are here with our young people who have proven themselves in many fields with their perseverance, industriousness and acumen. Turkey’s largest indoor hall, with a capacity of 5 thousand people. In this hall, especially our young athletes have become the pride of our country and our nation with their achievements. Now we, Tokyo and now we say the target is Paris. We will continue on the road with the permission of Allah with the Olympic medals that will surpass Tokyo. We have just watched and listened to our championship in fencing, now we say that we are the Olympic champion. I just got another good news. It is in the World Boxing Championship in Istanbul “We have released a new gold in ‘Ayse, with our daughter. We have four finalists tomorrow night, again in women. Can we make it four quarters, we will. We will wait for their good news.”

President Erdogan: We broke the traps one by one with an understanding that embraces the youth!

Erdoğan expressed that he believes there will be many champions who will raise the glorious Turkish flag and wave it among the active athletes, whose number reaches 2.5 million. Erdogan said that he knows that the young people in Ankara, representing the cities, have a side that is appreciated in every aspect of life where they come from.

2 of 9 puppies poisoned in Ankara died!

CHP Chairman Kemal Kılıçdaroğlu evaluated the developments at the 6-way table: ‘We did not experience a crisis at the table’

Collection documents… What does the Central Bank of Egypt’s decision mean?
February 18, 2022

Collection documents… What does the Central Bank of Egypt’s decision mean?

Pepe Ruiz explains his presence at the Vox macro-event and affirms that Abascal is “a serious man”
October 7, 2022

The last week’s schedule in the Super League has been announced
May 16, 2022

Danae Boronat leaves ‘Sport’ and accuses the RFEF of pressuring the media not to publish “certain things that we know”
October 5, 2022

The lawsuit process hurt us more

The event that AKP Tunceli Provincial Chairman Sercan Özaydın was welcomed with a military ceremony was brought to the agenda of the Grand National Assembly of Turkey.
July 29, 2022

The event that AKP Tunceli Provincial Chairman Sercan Özaydın was welcomed with a military ceremony was brought to the agenda of the Grand National Assembly of Turkey.

‘On everyone’s lips’ extends its duration by Cuatro to occupy the ‘High tension’ slot
October 27, 2022