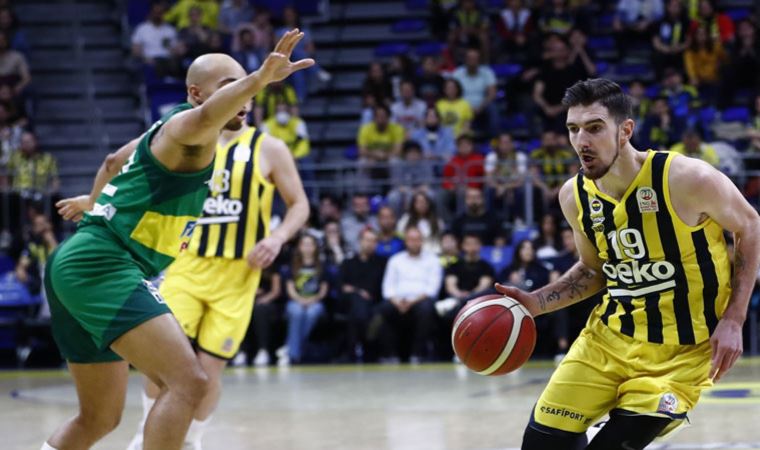 In the third match of the ING Basketball Super League play-off quarter-finals, Fenerbahçe Beko defeated Frutti Extra Bursaspor 93-81 in the field and won the series 2-1 and advanced to the semi-finals.

Frutti Extra Bursaspor, which was effective with three-point shots at the beginning of the match, finished the first period 24-21 superior, by increasing the gap to 11 points.

Fenerbahçe Beko took the lead 30-28 with Melih Mahmutoğlu’s three-pointer in the 14th minute. Maintaining their score in the rest of the period, the yellow-dark blue team closed the first half ahead 50-46, where Vesely showed a scorer performance.

Both teams started the third period with consecutive turnovers. Playing good defense this quarter, the yellow-dark blue team increased the lead to 17 points in the 28th minute: 69-52. At the end of the period, the competition stopped for a while due to the tension between the few Bursaspor fans in the box and the yellow-dark blue fans. The encounter continued after the atmosphere calmed down with the intervention of the police. The visiting team fans were removed from the hall. After the break, Onuralp Bitim and Frutti Extra Bursaspor, which were effective in the attack, reduced the difference, but Fenerbahçe Beko’s 70-61 superiority was entered into the final period.

Fenerbahce Beko, which maintained its score advantage in the last quarter, won 93-81 and made its name in the semi-finals.

Vesely played an important role in the victory with 16 points and 8 rebounds in the home team. In the guest team, Onuralp Bitim’s 20 points could not prevent the defeat.

Interesting event in London! Carpet formed from suitcases due to malfunction at the airport

The “Crypto War” .. Russia, Ukraine and the Cryptocurrency Conflict

José Antonio’s confession in First Dates: “I am the ugliest in the universe”
September 29, 2022

José Antonio’s confession in First Dates: “I am the ugliest in the universe”

Last minute: Tickets for the Lithuanian match of the A National Football Team are on sale
May 17, 2022

Last minute: Tickets for the Lithuanian match of the A National Football Team are on sale

Drug and food smugglers were not allowed at customs
May 19, 2022

Drug and food smugglers were not allowed at customs

Retirees in Germany “go to Turkey to warm up” proposal – Last Minute World News
May 11, 2022

A “naked picture” causes a crisis in the Juventus dressing rooms
May 9, 2022

A “naked picture” causes a crisis in the Juventus dressing rooms

“Three are missing in all of Spain to come”

Statement by Edirne Governor’s Office on ’39 immigrants stranded in the Meriç river’
August 15, 2022

More than 5 million doses of vaccine from America to Egypt and Nigeria
February 18, 2022