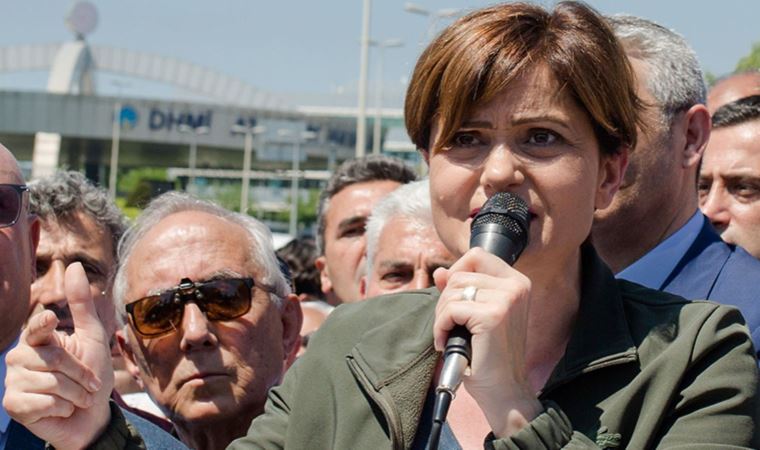 Reactions continue to begin the demolition of Istanbul Atatürk Airport on the grounds that it will be a national garden. CHP Istanbul Provincial Chairperson Canan Kaftancıoğlu and the CHP delegation consisting of deputies made a statement at Atatürk Airport, where the runways began to be demolished. Upon the call of Kaftancıoğlu, many citizens came to Atatürk Airport yesterday morning. The group gathered in front of the airport often shouted slogans such as “This is the people’s place, the people will stay”.

Making a statement here, Kaftancıoğlu said, “They want to sell Istanbul Airport to their Qatari and Saudi Arabian collaborators. Whatever they do to Atatürk Airport, named after Atatürk, they will leave anyway. We will hold accountable those who damaged Atatürk Airport. We will hold accountable those who illegally and unlawfully put construction equipment here. We will hold to account, under the CHP, those who bid here in order to pocket a single penny of the poor, from Qatar and Saudi Arabia, whoever is buying it,” he said.

Kaftancıoğlu continued his words as follows: “Atatürk Airport was closed to scheduled passenger traffic in 2019. In the pandemic, the field hospital was opened. Half of a track was slaughtered when there were dozens of places. The reason why Istanbul Airport is not operated together with Atatürk Airport is not due to technical reasons.

It is known that Istanbul and Ataturk airports can be arranged to operate simultaneously. Only 50 percent of Istanbul Airport has been built. When Atatürk Airport was closed, it was carrying 65 million passengers a year. Sabiha Gökçen Airport currently carries 35 million passengers. The current capacity of Istanbul Airport is 90 million. While the current capacity of these three airports is 220 million in their current state, it is obvious that a new investment of 250 billion Euros is unnecessary to complete the construction. “When we come to power, we will examine and inspect all businesses that have been built unjustly and unlawfully. If a penny more is invested than they deserve, we will get them all,’ he said. Since they are afraid of this, they want to sell Istanbul Airport as soon as possible. What did Mustafa Kemal Atatürk say in his Address to the Youth these days, when he started the national liberation struggle, ‘Those who have power can engage in negligence, misguidance and even treason.’ As it is today. We will never despair, they will go as they came, they will go as they came, they will go as they came.”

‘They didn’t want him to be seen’

The murder that made Datça stand up

We are sure that he will not allow the establishment of a military base.

15 members of the 29-member VQA changed in HDP

The escape of a dangerous criminal with the help of his guard ends with their arrest
May 10, 2022

His father reveals… this is “Waad El-Neny” before the final of the African Nations
February 6, 2022

President Erdogan to meet with Algerian counterpart Tebboune
May 16, 2022

The spokesperson launched a perception operation over Syrian students! He denied his own report.
May 11, 2022

The spokesperson launched a perception operation over Syrian students! He denied his own report.

make their burgers look bigger than they are in their ads
May 19, 2022

make their burgers look bigger than they are in their ads

Ünal Gül is waiting for help to keep his son alive
September 22, 2022

Ünal Gül is waiting for help to keep his son alive

Morocco.. Arrest of a person who planned a “major terrorist act”
March 2, 2022

Morocco.. Arrest of a person who planned a “major terrorist act”